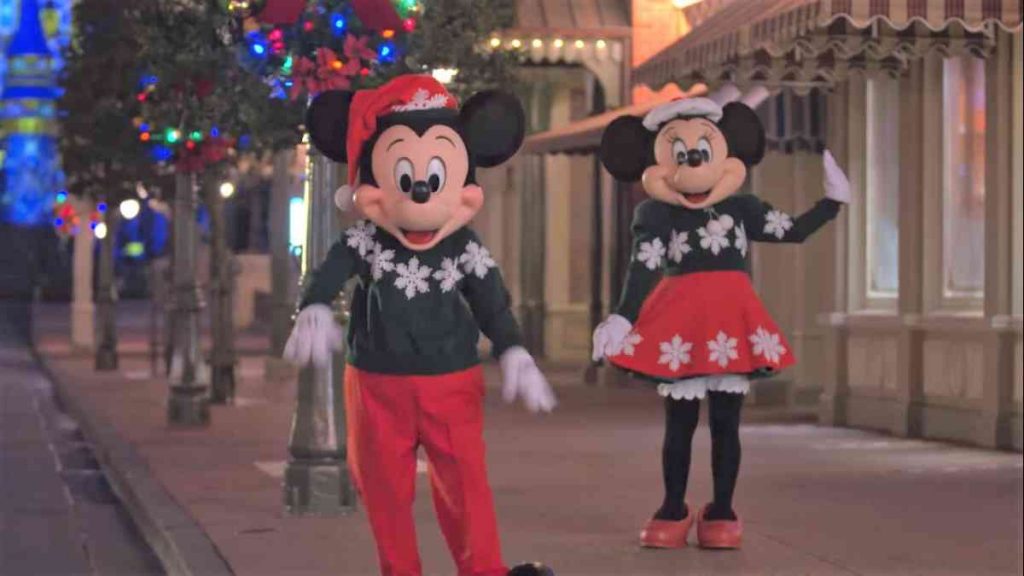 The good news is that now we are in December, which means that Christmas is fully underway in all four parks. As well as the operational hotels, and at Disney Springs. It may not be a normal year, but it still feels festive at Walt Disney World! Enjoy these celebrations that are created just for this joyful season and fill the air with Christmas magic!

Cinderella Castle Dream Lights will not be happening at the Magic Kingdom this holiday season. Instead, a series of holiday projections will cover the Cinderella Castle in the evening and already it has been a hit! “When night falls, special projection effects will give a festive look to Cinderella Castle this year, providing a colorful backdrop for our guests’ photos. The appearance of the iconic castle will be transformed with a rotating series of designs including a whimsical Christmas sweater and a regal overlay of red, green, and gold ornamentation. This will be in place of the Castle Dream Lights.” 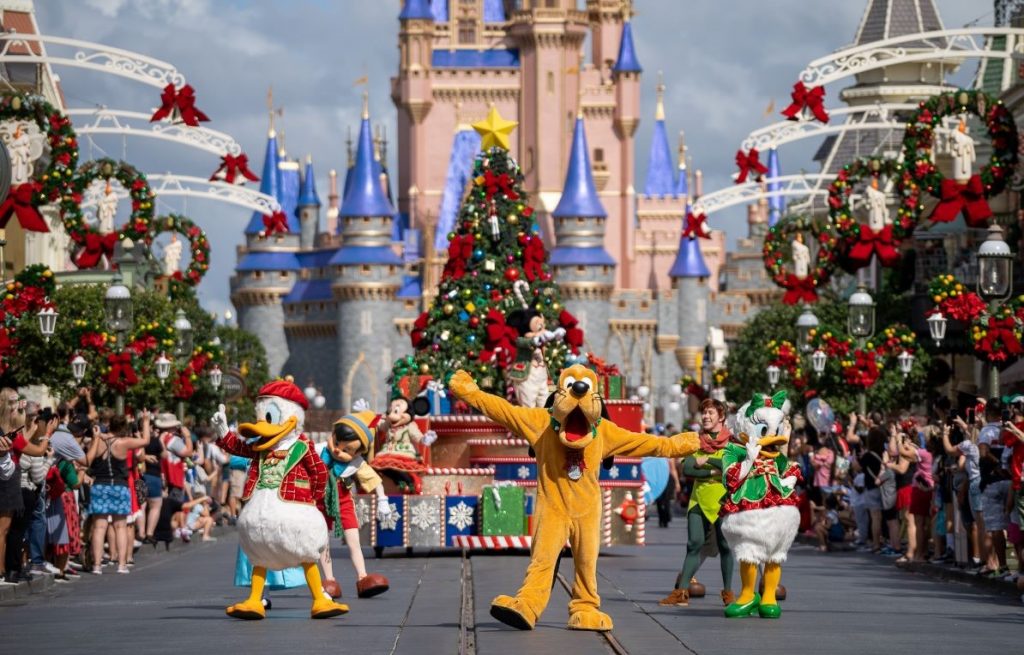 Other holiday experiences that draw big crowds will be on hiatus this year as well, such as Mickey’s Very Merry Christmas Party at the Magic Kingdom and the Candlelight Processional at EPCOT.  Magic Kingdom Park features festive cavalcades with floats and music, including ‘Mickey’s Holiday Cavalcade’, ‘Goofy’s Scrumptious Cavalcade’, and ‘A Royal Christmas Processional’. 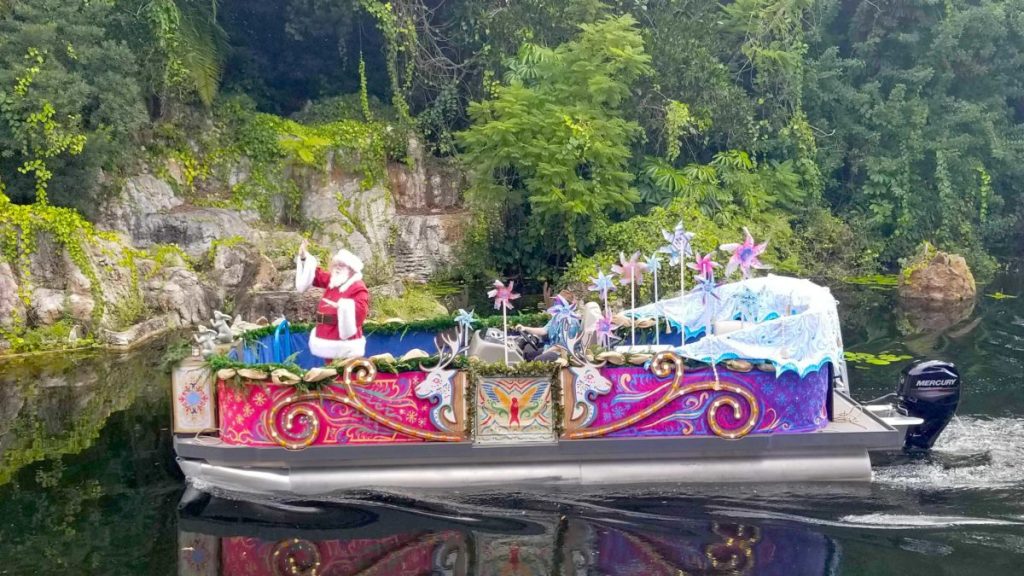 Santa Claus is coming to town! In fact, he’s already arrived at Disney’s Animal Kingdom, where he’s making his way around Discovery River in his own Festive Flotilla. Santa’s boat is decorated to look like a sleigh, with beautiful paint on the sides and white reindeer reminiscent of other Animal Kingdom decorations themed to last year’s Merry Menagerie. 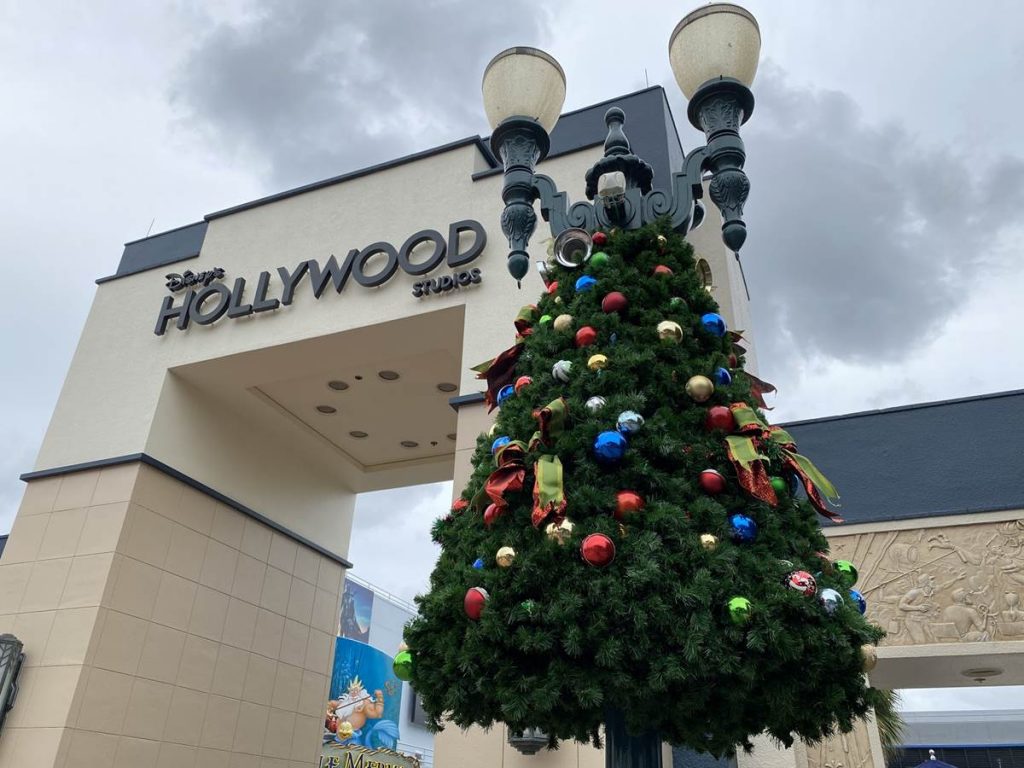 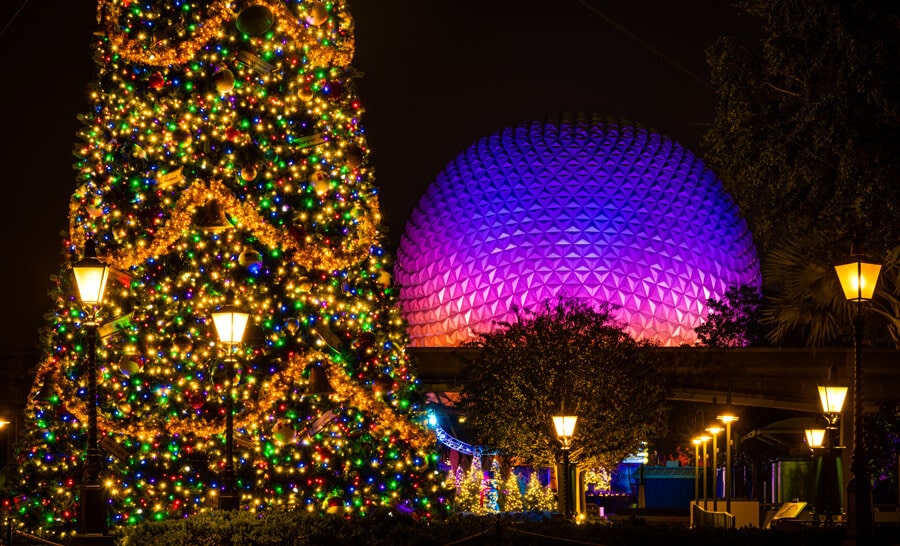 Experience cheerful celebrations from around the world! Taste of Epcot International Festival of the Holidays – From November 27 to December 31, be sure to visit our Holiday Kitchens and also take part in our sweet Holiday Cookie Stroll.

Experience cheerful celebrations from around the world!

Taste of Epcot International Festival of the Holidays – From November 27 to December 31, be sure to visit our Holiday Kitchens and also take part in our sweet Holiday Cookie Stroll.
Santa Claus Promenade – Witness Santa Claus’s grand tour around World Showcase in his horse-drawn sleigh, wishing everyone a happy holiday season.
Mickey and Friends Holiday World Tour-  Look for Micky Mouse and his pals all dressed in their seasonal finest.
Frozen Holiday Promenade – Watch Queen Anna and Elsa ring in the season, journeying from country to country and waving to their fans—like you—along the way.
New! Olaf’s Holiday Tradition Expedition Scavenger Hunt – Have a blast tracking down all of the things on Olaf’s list during this fun scavenger hunt.

Enjoy the Festive 2020 Holidays at Walt Disney World Parks, even more, when you purchase your Disney World Discount Tickets from Epic Visitor Services and save!

This site uses Akismet to reduce spam. Learn how your comment data is processed.

The Busch Garden’s Mardi Gras Event 2021 takes place on weekends and select dates from Jan. 16 – Feb. 16. It will feature live music, street performers, and open-air entertainment. Reservations are required for entry to the park due to limited capacity and can be made... 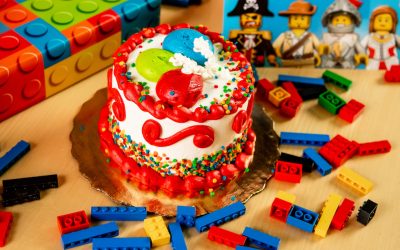 LEGOLAND Florida Celebrate 10 Years of offering both adults and children an exciting place to experience great attractions and marvelous shows. Legoland will be turning back time to 2011 when it all began. They will celebrate with special pricing and many new things coming to the Florida resort.